The sun is a source of free energy which can be used to produce electricity as well as heat. The production of solar electricity relies on active solar technology. The most commonly encountered system for solar electricity production is solar photovoltaic. Other systems, such as concentrating solar thermal plants, whose primary output is heat, can also be used by producing steam to generate electricity using a turbine.

When light energy is absorbed by a material known as a semiconductor, an electrical charge is created, this property of the material is known as the photoelectric effect. Silicon is the most common semiconductor used by PV cell manufacturers.

There are two main types of PV system : 1. Grid-connected PV system and 2. Stand-alone PV system. These are detailed below.

Stand-alone PV systems are used in areas that are not easily accessible or have no access to an electric grid. A stand-alone system is independent of the electricity grid, with the energy produced normally being stored in batteries. A typical stand-alone system would consist of a PV module or modules, batteries, and a charge controller. An inverter may also be included in the system to convert the direct current generated by the PV modules to the alternating current form required by normal appliances. 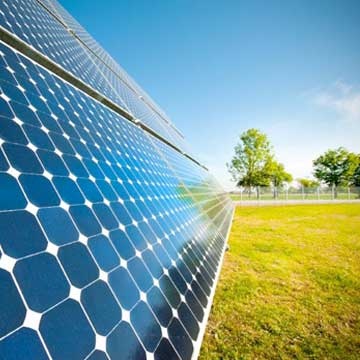